For the third stage of my PhD research, I am participating with students of architecture on the project 'Facilitating Spatial Negotiation'. The project employs the participatory painting method to explore how the visualisation of ideas can take place in a more critical and democratic way. Such participatory practice is not based on achieving consensus, but rather on creating a conflictual space - a space in which conflicts are revealed in order to set in motion a transformative effect. This transformation is the result of the critical reflection on the students working methods, rather than a specific change in the design itself. The sessions address particular architectural design project, which are part of the students' course, and form the basis of the spatial negotiation. This 'spatial negotiation' moves beyond the assumed limits of the project, and takes into consideration the more marginal factors and actors engaged or affected by the project. 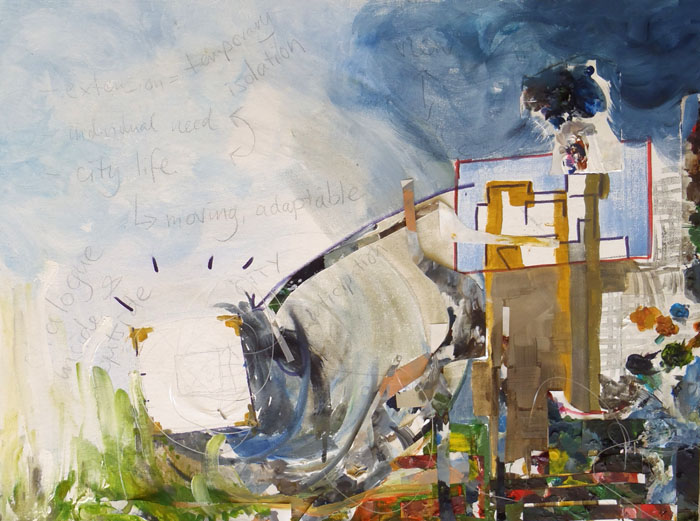 The second stage of my PhD research is based on a project which invites various practitioners - amongst others architects, engineers, artists, psychologists, handymen, property developers and councillors - for a conversation about the production of space. In these two hour session, we discuss a particular problem or topic that is of interest to the participant. This might be the design of a future house or redesign of the garden, a frustration with how public space functions or a personal narrative of belonging to certain places. Concurrently, we collaboratively visualise our discussion using a diversity of painting methods and styles. The sessions are offered as a custom-made architectural design service, giving the painting to the participant afterwards.

The purpose of this project is to study how thinking about architecture can be visualised through painting. An in-depth analysis of this project has been published in the journal Studies in Material Thinking: Painting Architecture: Towards a Practice-Led Research Methodology (2014).

The project 'Painting an Alternative Masterplan' is the first stage of my PhD research. It responds to the regeneration of London by asking: how can an image be developed which is contingent on the multiplicity of perspectives on this large-scale redevelopment? The project aims to create a polyphonic visual representation of the various perspectives on urban redevelopment. The time-based documentation shows the painting with the projection of appropriated images from various sources on the painted surface. The effect is that of a perpetually transforming masterplan, contingent on the projected view.

Documentation of the work 'Alternative Masterplan' (2012).

'Painting an Alternative Masterplan' has been presented as a one hour Continuing Professional Development session (CPD) at the UCL Cities Methodologies event on 6 July 2012:

"The CPD sets out the rationale behind the production of painting as a design method. During this interactive training, you will: learn about alternative modes of visual representation of the urban environment; develop an understanding of painting as a research method; and become skilled in critically assessing your own design intentions. The session will provide real-life examples through the work ‘Alternative Masterplan’, which analyses the visual methods used to (re)present the current large-scale redevelopment of Canning Town in East London. The projection appropriates the visual material produced as part of the urban regeneration, while the painting proposes an alternative visual language that reflects the diversity of perspectives coexisting in an urban site. The work questions the representational and rhetorical value of the images, and critiques the ubiquitous representational styles of digital technology which fail to reflect the full spectrum of urban reality."

Participatory public art event for Art at the Centre, followed by exhibition of the art work at the Castle Gallery, Queenborough, Isle of Sheppey, Kent.

This workshop invited the public to help construct a map of Sheppey and the Netherlands entirely from memory. The artist invites people to help alter the image to site places of importance to them and their lives.

"Sheppey turns Orange is a celebration of the rich history of Queenborough on the Isle of Sheppey including a fun and creative interpretation of the Island's invasion and capture by the Dutch in 1667. The event will coincide with the annual local festival; Sea Sheppey (29th and 30th Sept) and a special Anglo-Dutch flavour will be added to the festival. Five Dutch artists will partner up with five local British artists to make artworks with the help of the public. These artworks will then be on temporary display for two weeks around the town and identified on a map, which will be distributed from the local Castle gallery."

The Dutch are known for their perfect organisation. Having two nationalities, Dutch and Polish, I am especially aware of how this influences the Dutch cityscape as well as the landscape, for instance when observed from the airplane. In comparison with the English and especially the Polish countryside, the Netherlands is geometrically structured. Roads, fields and canals are straight and practical. Every element seems to have been planned beforehand.

This cultural feature has a long history, which can be traced back to a period which is often called the 'Golden Age of Dutch Cartography', ca. 1550 to 1675. The Dutch dominated the international map trade and produced the most precise and artistic maps and atlases. The production of maps stems from a strong geographical awareness and a need to organise the land, resulting in naval and commercial power. Although the reason for journeys in this period was often to increase trade, later this territoriality resulted in an expanded colonisation of other countries. The invasion of the Isle of Sheppey by the Dutch in 1667 falls in this period of map-making expertise.

The project 'Sheppey Turns Orange' seems to aim simultaneously at a playful understanding of the invaders - the Dutch and their culture - and at a better knowledge of its own location. This defining of the isle's own identity and partly isolated location is also visible in the mission of previous workshops. I propose therefore to use cartography as an artistic means to connect the past and the present, in which a sense of identity is defined through the mapping of own and foreign territory.

My idea is to create a map on a big blackboard. The blackboard is not only a practical means of mapping space, by being able to add and delete marks in a forever changing drawing. It is also an object which wants to teach, which is didactic or even authoritative. This illustrates the symbolic value of the map as a means of power over the invaded land.

The public will have a crucial role in creating the map. They will instruct me - from memory - how to draw the Isle of Sheppey and what its shape is. It will also be an experiment to see how well they know the outline of the Netherlands. This working method will allow for people to be involved over a longer period of time, as well as for several minutes only. I would like the map to be a dynamic drawing, in which children can locate their own house, combined with a more perfect outlining as remembered by adults. This way, the map will be created as it was originally: people's personal experience and discovery of the land translated onto the two-dimensional plane.

The map could take the form of three MDF panels 8x4 ft, on which Sheppey and the Netherlands are either connected or separated. The boards will lean against the wall. The blackboard could either stand inside the gallery - depending on the ceiling height as well as the available space - or outside against a big wall. This would depend on the availability of a site and the weather, which could be problematic in the case of rain. I would consider using white ceramics pencils rather than chalk if we decide on an outdoor location, as this might not wash off in wet conditions.

"Artists - painters, sculptors or architects - do not show space, they create it" (Paul Klee, in: Henri Lefebvre,The Production of Space).

In this research into creating a two-dimensional work, which will be a blending of the surrounding three-dimensional space, I believe in the need for an active encounter with architecture. I find it very restrictive to use collected/found images or photographic documentation to create new work, because you tend to lose the direct impact of an experience that is the basis of your inspiration. It also means less opportunity to question the theme, because you focus on the visual aspects rather than the theoretical. Instead of recreating architectural structures and making the viewer experience a real but artificial space (for example the work of Monika Sosnowska and Gregor Schneider), I would like to explore the possibility of a production of space on the flat plane, similar to the way it is produced in the city between the citizen and the architecture. With this I mean creating an 'active' image - an image that is not static in itself, but implies the everyday use and experience of architecture.

The project Reflections was a temporary site-specific installation for the Nuffield Orthopaedic Centre in Oxford. I was invited by the centre's arts manager to exhibit in the restaurant space. This space, however, did not lend itself well for finished pieces, but instead it asked for an intervention. Having analysed the interior of the space, I created line drawings on large plexiglas sheets, which mirrored the space in the windows. The installation was accompanied by a letter to the visitors, displayed on the tables:

"Instead of using the traditional way of hanging paintings on the walls, I preferred to use the windows in this restaurant. Making an art work for this space might seem an easy job, but when you have a good look around you, you notice that the restaurant is already full of objects, people and colours. I have tried to remove all these details in my mind to see the bare structure of this interior. I am fascinated with architecture and the way it influences our lives, often unconsciously. This space has a very interesting structure. It is divided into several table areas. There are a lot of pillars connected to smaller walls, subdividing the space even further. But also have a look at the shape of the ceiling and how it flows over into the walls. The restaurant is like a lattice in which we eat and talk, unaware of how such a rigid structure could influence our well-being. The four paintings on the windows are a reflection of my view of this space. The images turn the windows not only into mirrors, but the lines also barricade our gaze outside, making a statement about the consequences of living in this kind of architecture."